The 2021 New Hampshire trip will be from July 26 - August 1. The trip will include five days of back packing in the White Mountains of New Hampshire and two on Cliff Island in Newfound Lake. We plan on meeting at the COLS house in Hollis, NH, on the morning of July 26, and will return on the evening of August 1.

The 2020 New Hampshire trip encompassed five days of backpacking and 3 days on Cliff Island on Newfound Lake. Newfound Lake is one of the cleanest lakes in the world. Cliff Island is a beautiful, 6 acre island that is completely undeveloped. The island is off the shore of a state park with a long sandy beach. In addition to swimming, games (ultimate frisbee, capture the flag ...) and all the fun things we did on the island, we had the opportunity to rock climb at Rumney, one of the top climbing areas in the Northeast.

The trip started with a flight into Redmond, Oregon. We backpacked in Oregon for 5 days, hiking in the Mount Jefferson Wilderness in an area around Three Finger Jack. We also hiked along the Pacific Crest Trail. We did not cross any roads during our time in the backcountry.

We then flew mid trip to the East coast, leaving in the morning and spending that night at Cliff Island on Newfound Lake in NH. On Cliff Island we joined the other COLS trip, which had been backpacking in NH for 5 days. The two COLS trips spent 2 1/2 days on the island together playing games, swimming, rock climbing, and biking. 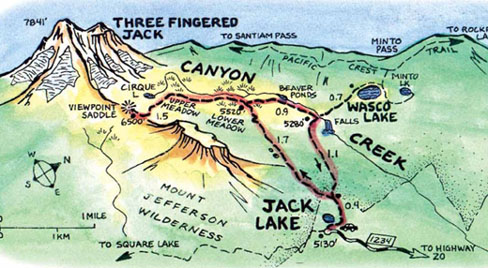 This trip was five days of backpacking in the Baldface/Cater Moriah ranges, three days on Cliff Island located in NewFound Lake, and rock climbing in Rumney.

The trip to the Bend, Oregon region encompassed six days of backpacking in the Mount Jefferson Wilderness Area, three days of rock climbing in Smith Rock State Park and three days of mountain biking in Bend.

The 2016 COLS trip brought boys aged 14-17 on adventures in Oregon, including backpacking in the Cascades, mounting biking in Bend, 1000 foot rock climb up Wolf Rock, bouldering at Sisters, 100 foot rappel off French's Dome. These were amazing adventures out west.

The 2015 New Hampshire trip was for boys ages 13-15. There were five days of backpacking, two days of white water kayaking with instruction, and four days on an island on Newfound Lake.

We spent 4 days on Cliff Island on Newfound Lake, one of the cleanest lakes in the world. Cliff Island is a beautiful, 6 acres island that is completely undeveloped. The island is off the shore of a state park with a long sandy beach. In addition to swimming, games (ultimate frisbee, capture the flag ...) and all the fun things we did on the island, we had an opportunity to rock climb at Rumney, one of the top climbing areas in the Northeast.

All COLS trips place an emphasis on leadership, particularly on leading yourself. They also include fun and engaging devotionals. Groups are encouraged to work to encourage one another and help each other out. This makes the trip more fun for everyone, and hopefully it influences our ongoing life habits. The intent is to contribute to the all the boys' growth in faith, character, friendships and life experience.

The trip dates were from July 15-24. For those traveling by airplane, we pick boys up from the airport and helped coordinate flights. When appropriate we provide a staff member to fly with the boys.

The cost for the 10-day 2015 New Hampshire trip was $100 per person. (The price was reduced thanks to a donation given to COLS with the request that a portion of the donated funds be used to increase the affordability of the program. COLS is a non-profit organization. If costs are an issue, we strive to accommodate financial needs.)

The 2014 New Hampshire trip was for boys ages 12-14. We spent five days backpacking trip and four days on an island all to ourselves. The backpacking trip was in the Baldface/Cater Moriah ranges, with hiking and camping in the Moriah Brook area, a beautiful place to swim and explore. We also spent a night at the Imp shelter, which offers one of the best places to watch a sunset in the White Mountains.

We spent 4 days on Cliff Island on Newfound Lake, off the shore of a state park with a long sandy beach, and we went rock climbing at Rumney.

Fayetteville is a destination adventure spot, and a COLS favorite on previous trips. From an outdoor adventure aspect it was more technically oriented with white water kayaking, rock climbing, and mountain biking as well as having fun on Summersville Lake. We also stopped at Gettysburg, Pennsylvania on the way home (July 4th evening and the next morning). As with all COLS trips, the goal was to encourage each participants in their faith and life skills, all in the context of having a good time.

The trip included 6-7 days of backpacking. The group visited the continental divide and also on the top of Longs Peak (14,260'), the highest peak in Rocky Mountain National Park. The weather cooperated, and we were able to rock climb near Estes Park Colorado. There were plenty of opportunities to fish, swim (very refreshing - cold :0 ), and play games. 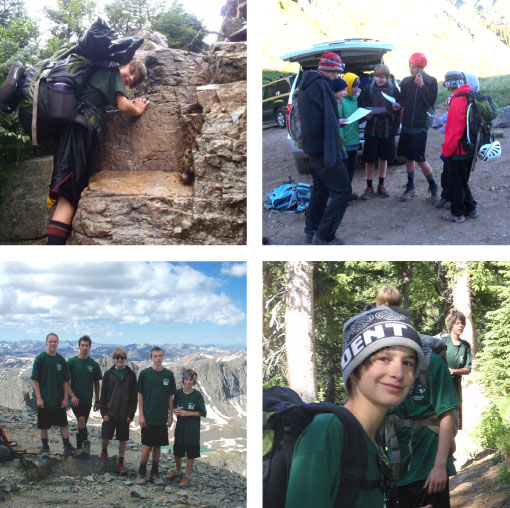